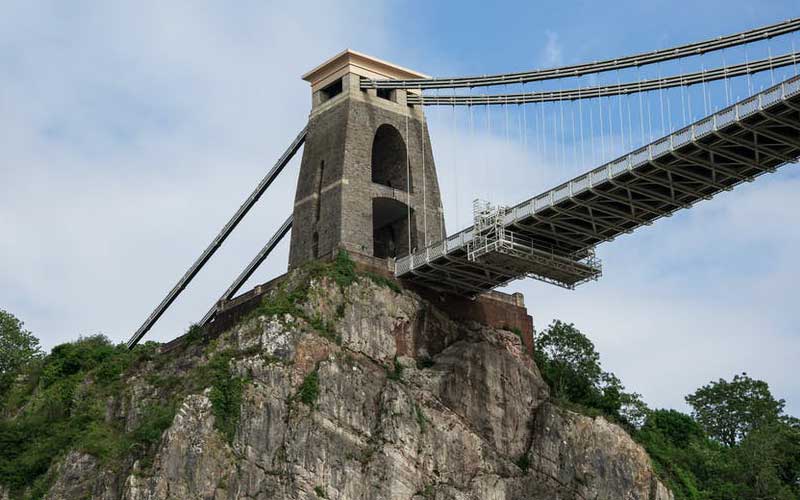 Once home to movie star Cary Grant and artist Damien Hurst, Bristol is a lively city steeped in a creative pedigree that stretches back through the centuries.

From the architectural tour de force of Isambard Brunel’s suspension bridge to the quirkiness of graffiti artist Banksy, every street and corner in this modern city of half a million people has something to see.

Here we look at Bristol’s creative past, present and future and why it’s the perfect place to visit.

If you spend any time in Bristol, one thing you will notice is its historic architecture. There’s hardly a street that isn’t home to a significant building that harks back to the past.

Bristol Byzantine developed out of the industrial revolution and applies to many buildings in the city. These enormous properties began to
crop up around 1850 and well into the latter half of the century, box-shaped, simple and highly functional designs.

Many of the buildings that have been turned into offices and flats over the last three to four decades were once huge warehouses and factories.

The brick faces of these buildings were often decorated with Italian gothic designs and examples still standing today include Bristol’s general hospital and the impressive Wait and James’ Granary near the dockside.

The Granary has had several different lives over the years. During the early part of the 20th century, it was still being used to store threshed grain. By the late 1960s and 70s, however, it became a jazz club and then a nightclub. It was famous in the 80s for hosting some of the top bands of the time including Status Quo and Genesis. Recently converted to flats, The Granary remains one of the most well-preserved examples of Bristol Byzantine.

Ask anyone to name the most memorable piece of architecture in Bristol and they will generally say the Clifton Suspension Bridge.

It is perhaps his crowning achievement and remains a recognisable feature of the UK that attracts thousands of tourists each year. The bridge is all the more startling because Brunel was just 24 when he was first appointed to the project. It would take 33 years to complete and it reportedly weighs 5 ½ tonnes per square inch.

While the Clifton Suspension Bridge is impressive, its creator Isambard Brunel was responsible for much more during his lifetime. He designed the Great Western Railway, one of the architectural marvels of the time, which connected Paddington in London to Bristol Temple Meads. In all, Brunel designed 25 railway lines and more than 100 bridges before he died at the age of just 53.

Head to the dockside in Bristol and you’ll see one of Brunel’s other great creations, the SS Great Britain. Launched in 1843, it was the world first luxury liner and was even used to transport emigrants to Australia. Left to rust in the 1930s when it came out of service, the ship was refloated in 1970 and was finally restored. It now sits in the Great Western Dockyard where it is Bristol’s most visited tourist attraction.

If you want to find out more about the creative past of Bristol, a visit to M Shed is a must. This museum is all about the city itself and you can discover everything from the vehicles that used to run up and down the local streets to the way neighbourhoods have changed over the years and the role Bristol played in the transatlantic slave trade.

For those who want to discover Bristol’s contemporary art scene, then the Arnolfini is another great
place to visit. Opened in 1961, it hosts works by famous artists from around the world and holds an international student film festival. The local university’s students often exhibit their work at the Arnolfini and regular workshops are held throughout the year for those who want to hone their creative talents.

Another brilliant place to spend an afternoon or two is the Bristol
Museum and Art Gallery which has also has works from all over the world. If you are a fan of Channel 4’s Grayson’s Art Club, then you can see the talent on display from a whole host of different celebrities.

Design, innovation and creativity lie at the heart of Bristol and nowhere is this more evident than in the local industry. For a long while, Bristol Cars held a unique place in the UK’s automobile sector, creating exclusive luxury sports vehicles that were sold all around the world.

Their original prototype of the Bristol 400 was unveiled in 1946 as the world was just coming out of the trauma of World War II and for the next half a century Bristol Cars became synonymous with innovation and style.

The Bristol 407 that came off the factory floor in 1961 was the archetypal sports car, developed for a high-end market. It featured in many movies of the day and is still a favourite with classic car enthusiasts today.

Unfortunately, into the 1970s and 80s, the company began to get into financial difficulties and in 2011 went into administration and was purchased by new owners.

The last car they produced was the Bristol Bullet, a sleek sports car that retailed at just under £100,000. In 2020, the company was eventually wound up and ceased to trade. There was some good news more recently, however. Bristol Cars may be rising from the ashes shortly and a new company set up near their original manufacturing plant in Filton, Bristol.

Filton also had a role to play in aerospace engineering. Design and innovation don’t get any better than the iconic Concorde. Take a trip out to this small suburb and you’ll find the last supersonic plane to be built on display at Aerospace Bristol.

This unique passenger jet was a collaboration between the UK and France and there had been nothing like it seen in the skies before. With
its distinctive pointed nose and sonic boom, Concorde made its first transatlantic crossing in 1973.

It had a maximum cruising speed of 1,354 miles per hour and was able to travel between London and New York in just under three hours once commercial flights began. There were only ever 14 Concordes built and they operated for 27 years, finally stopping service in 2003.

When it comes to creativity, Aardman Animations is probably at the forefront of what Bristol has to offer. It was certainly a small company that made a big splash more than 20 years ago, becoming a global, award-winning recognised brand. It was founded in the early 1970s and was one of the few remaining animation companies at the time still producing stop motion pictures. Their initial offerings were small but memorable – they created the character Morph for BBC children’s programme Vision On, for example, and later went on to develop the still much-loved Creature Comforts.

The company also worked on the stop animation for Peter Gabriel’s Sledgehammer which was one of the major pop hits of the 80s.

It was the short features called Creature Comforts that sent the company to the next level, got it globally recognised and earned them an Academy Award. This eventually led to a newcomer to Aardman Animations, Nick Parks, creating the iconic films that starred Wallace and Gromit. In 1997, the company teamed up with DreamWorks and began producing full-length features such as Chicken Run and the award-winning Curse of the Were-Rabbit.

In 2007, Aardman formed a new relationship with Sony Pictures and in 2018, the ownership of the company was transferred to the employees to ensure that it stays independent. The company is well known in Bristol for providing resources and training to young animators and sits at the heart of the city’s creative heart.

Another prominent figure in Bristol design and creativity is, of course, Banksy. Part street artist, part political activist, his works are seen around the UK and have become synonymous with modern culture. The identity of Banksy remains a mystery and the subject of much speculation but we do know that he was born in Bristol in 1974.

He first came to prominence in the late 1980s as part of Bristol’s street art scene and over the years his works have appeared in places as far-flung as London, New York and LA.

His paintings appear on walls and are largely political in nature. The good news is that you can still see some of his remaining works in areas of Bristol. These include Valentine’s Day Mural in Barton Hill, close to where Banksy used to attend the local youth club. There is another work on the side of a building in Albion Docks – The Girl with the Pierced Eardrum – and one that was removed from a wall central Bristol and which now resides in the M Shed museum.

Damien Hirst: The Bad Boy of the Creative Arts

Almost as well-known as Banksy, Damien Hirst dominated the UK art scene in the 1990s and is particularly famous for his habit of cutting
animals in half and preserving them in formaldehyde. His Physical Impossibility of Death in the Mind of Someone Living displayed a 14-foot tiger shark in a glass cage. In 2008, Hurst sold his entire list of artworks in an auction that raised £111 million.

Born in Bristol in 1965, Hirst became part of the Young British Artists movement and won the Turner Prize in 1995. He was often seen as the poster boy for cool Britannia in the 90s and is listed as one of the 10 most important contemporary artists of modern times.

Raising the Profile of Ethnic Artists in Bristol

Bristol creativity is all about breaking barriers down and building community. In recent times, frustration at the lack of visibility for black and ethnic minority artists led Bristol’s Rising Art Agency to try and change perceptions. That included an exhibition entitled “Why are we not here?” that was held at Spike Island and featured 8 artists including works by Jasmine Thompson and Donnell Asare.

According to co-curator Stacy Olika:

“In Bristol, there are so many cultures and that comes through in this artwork. In the art world, people are talking like everyone knows what art should be. There is not one type of art or one language, and this project allows people to be expressive in whatever way they feel.”

Michele Curtis is an artist, illustrator and graphic designer who is also the founder of Iconic Black Bristolians. Born to Jamaican parents, she grew up in Easton in Bristol and is most well-known in recent years for organising the Seven Saints of St Pauls mural project which celebrated the St Pauls Carnival and its founders.

The work is designed to highlight black men and women who fought for their communities and celebrates their stories. The murals include Carmen Beckford who played a pivotal role in race relations and Audley Evans who was involved in the Bristol Bus Boycotts.

Bristol’s creative identity is not just about the people but its educational institutions as well. Both Bower Ashton UWE and the City of Bristol College have a distinctive and enduring design history and attract students from all over the world.

Bower Ashton UWE offer a range of different courses in design craft and communications as well as fashion and art at both graduate and postgraduate level. With state of the art facilities including dedicated design studios, UWE is one of the most popular creative places to study in the UK.

With both day and evening courses, the City
of Bristol College covers everything from film and digital to fashion and traditional art and design. With opportunities to work on real-life projects within different industries, the college is often the starting point for many hoping to forge a path in the creative sectors.

Whether it’s digital or physical painting, sculpture, technological innovation, fashion or theatre, Bristol remains a creative hub that attracts people from all over the globe. The city’s distinct history and multicultural communities make it one of the most exciting locations for creatives in the world today.

Contact us for a friendly web design quote today